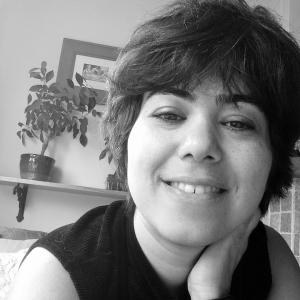 For as long as she can remember, Azadeh has been absolutely fascinated by the different forms of art, either visual arts or drama.

While studying Graphic Design in high school in Iran, Azadeh received many awards as an actress, performing in drama festivals. She continued with visual arts and received a B.A. in Painting, followed by an M.A. in Visual Communication after which she started her career as an art lecturer in university for six years.

In 2015 Azadeh moved to Canada and participated in a course in Essential Illustration in OCAD University. At the same time, she engaged with Vibe Arts For Children and Youth as an established artist. Later in 2016 she joined the Mural Career Development Certificate Program and worked with Mural Routes Organisation as part of their creative mural team. She also worked with Blinc Studios as a muralist to create several murals in Toronto.

In 2017 Azadeh joined the Canadian Center for Language and Cultural Studies (CCLCS) as a student to gain drama experience in English while working as a visual arts instructor in the RosettaSchool Of Visual Art.

They had not read the news

They had not read the news

Try-before-you-buy with a 3 month rental. 100% of your rental payments go towards the purchase (interest free). Message the artist directly, and start the conversation.

We make it easy for you to try art with smart payment plans and try-before-you-buy models.

See How It Works

Artwork protection is included on all art rentals up to $5K. Our Customer Care team is always here to help.

1% from every transaction goes towards SKETCH WORKING ARTS.